Why is it that some things are just determined not to be made? I refer at the current time to a pair of beaded gloves I am endeavouring to knit – for charity I might add (in fact I did add). But I could also be making reference to one particular sleeve of my prized steeky cardigan, which caused me much pain and grief and required more than one attempt before it was right.

Returning to the gloves in question. I have made at least five pairs of gloves using this particular pattern. It’s not like I don’t know what I’m doing. But the current pair are seemingly determined to go wrong at every opportunity. I drop stitches, get bits of the pattern wrong – and now, just as I have almost finished, I have run out of beads. So, instead of finishing tonight, I’m going to have to troll down to Covent Garden and Beadworks tomorrow to get some more beads. And that is going to be difficult – there are so many lovely shiny things at Beadworks and in Covent Garden in general, so it is always tricky getting in and out without serious damage to my bank account. 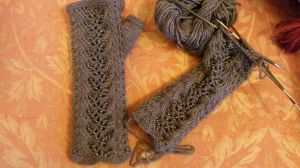 One and a half fingerless gloves

There are some items which just fight against their own existence. I have a cotton dolman sleeve jumper which is almost finished – and has been for about 30 years. It’s not that I don’t like it or intend to finish it one day. It’s just that whenever I do summon up the courage to take up the challenge once again the bloody thing goes wrong – AGAIN (and again, and again).

What’s a knitter to do??? Especially when there are so many other projects screaming for attention, all of which promise to be good and knit up without fuss or drama?